No doubt you, like me, have ‘routine’ tasks that you do each day with little or no thought. Yet, they become second nature to us, helping us get through the more mundane aspects of our life. However, there is danger in allowing too many things to become routine.

Why? Because routine is the assassin of personal growth and creativity.

Once we begin to institute ‘routine’ into our lives, it slowly creeps into more and more of our day. We eat almost the same breakfast each day, drive the same route to work, eat at the same lunch spot, read the same newspaper, listen to the same radio station, shop at the same stores, and talk with the same people. On weekends we go to the same bar or restaurant with the same friends. If asked to prepare a different evening meal for 30 days, I would guess that many people would run out of steam in 14 or 15 days.

The problem is that we’ve become ‘comfortable,’ allowing routine to wrap us up and tuck us into our comfort zone. We don’t have to think about what we are doing; it’s all become routine.

To grow as a person, we need to stimulate our brains with new sights and sounds. But our ‘routine’ is shutting the door to them. We need to grow personally to live a happier and more fulfilled life. Stimulating our brain and mind will lead us to greater creativity, expanding our horizons.

So, get out of the car and walk or ride a bike to work. At the very least, take a different route. Listen to different music, visit new places, meet new people, and join a new social group. Anything that will allow you to ……

Step Outside Your Comfort Zone

Archie had served the Railway Company as a conductor for fifty years. When his time to retire arrived, he found the parting a severe wrench. Hearing how saddened their retiring employee was, the Company presented him with a de-commissioned coach for his garden to serve as a daily reminder of his days on the line.

One very wet day, some of his friends called to see Archie and were informed by his wife that he would be ‘on the train.’ At the bottom of the garden, they found Archie sitting on the carriage step, smoking furiously at his pipe and with an old sack over his shoulders to protect him from the downpour. “Hello, Archie,” his friends greeted him, “why aren’t you inside on a day like this?”  “Can’t you see?” replied Archie with a nod towards the windows of the old coach, “they only sent me a non-smoker.”

45-year-old Amy Brasher was arrested in San Antonio, Texas. A mechanic reported to police that 18 packets of illegal drugs were hidden in the engine compartment of the car she had brought in for an oil change. According to police, Brasher later said that she didn’t realize that the mechanic would have to raise the hood to change the oil.

“Reach for those things that are in front of you,
that’s where your future lies.”

The Earth IS Flat!

Despite what some people think since the world is arguably 75% water that is not carbonated,…One could accurately say that it’s technically flat.

1. What game show host, born in Winnipeg, kept making deals?
Monty Hall.
2. In the nursery rhyme Pease Porridge Hot. How old was the porridge?
Nine Days.
3. What country would you associate the “Tarantella” dance with?
Italy.
4. Who played Rocky's wife in the 'Rocky' movies?
Talia Shire.
5. In what movie did Huey Lewis sing 'The power of Love'?
Back to the Future.
6. What name is given to the South African rugby team?
Springboks
7. In which group of islands would you find Tenerife?
The Canary Islands.
8. What is the Japanese sport of fencing with Bamboo staves called?
Kendo

Aries Mar. 21 – Apr. 19: If called on to mediate, don’t be afraid to call things as you see them. Remember, you are the referee.

Taurus Apr. 20 – May 20:  Your expectations may be a little high. Have the courage to modify them. But never lower them.

Gemini May 21 – June 20: Discuss a career move with your supervisor. They are in your corner and will give you sound guidance.

Cancer June 21 – July 22: School activities will take more of your family’s time. Make sure that you make it quality time.

Leo July 23 – Aug 22:An overheard conversation will possibly give you new insights into an issue that is puzzling you.

Virgo Aug 23 – Sept 22: Don’t let some minor problems get in the way. Just deal with them without disturbing the status quo.

Libra Sept 23 – Oct 22: Talk with your mate. Something is disturbing them that they are having difficulty disclosing. Listen carefully.

Scorpio Oct 23 – Nov 21: An obnoxious person has the tendency to irritate you. Keep your cool and avoid all contact with them.

Sagittarius Nov 22 – Dec 21: Watch your back and don’t believe everything you hear. Someone is trying to get you to do something foolish.

Capricorn Dec 22 – Jan 19: It’s an excellent time to think about what you will be wearing this summer. Start looking now.

Aquarius Jan 20 – Feb 18: The spotlight swings on you this week. Don’t get flustered; take things as they happen, and you will be OK.

Pisces Feb 19 – Mar 20:  A practical joke backfires. You can do nothing but “fess up and take your lumps.

There have been jokes for well over four thousand years. The oldest surviving example of a joke book is Philogelos, or The Laughter Lover; it contains 260 jokes written by Hierokles and Philagrius in the fourth century. The jokes have surprisingly modern themes and are divided into categories such as Incompetents and people with bad breath. In addition, intellectuals are often portrayed as those who lack common sense.

Many people are familiar with Monty Python’s dead parrot sketch. In an old version, a Roman buys a slave, who dies shortly afterwards. When he complains to the seller, the Roman is told: “He didn’t die when I owned him.”

Coming to a gas pump near you! 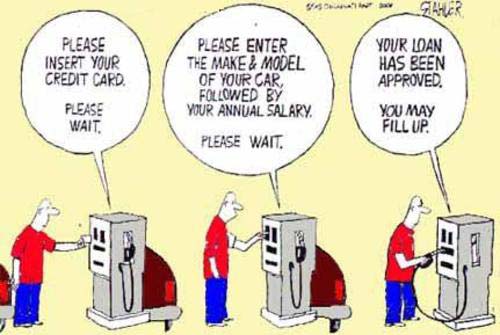 In a small town somewhere in the USA, there is a large factory that will only recruit married men. One of the local women, a feisty young lady, was angry about this and demanded to speak to the manager to find out why. She demanded, “Why is it you limit your employees to married men? Is it because you think women are weak, dumb, cantankerous…….or what?” “Not at all, Ma’am,’ the Factory Manager replied. “It is because our employees are used to obeying orders, are accustomed to being shoved around, know how to keep their mouths shut and don’t pout when I yell at them.”

There is a subtle but essential difference between “complete” and “finished.”

When you marry the right one, you are complete.

When you marry the wrong one, you are finished.

And if the right one catches you with the wrong one, you are completely finished

The little boy wasn’t getting good marks in school. One day he made the teacher quite surprised. He tapped her on the shoulder and said…

“I don’t want to scare you, but my daddy says if I don’t get better grades, somebody will get a spanking….”.

Thinking about the future

Q. How does a man show he’s planning for the future?

A. He buys two cases of beer instead of one.