The Pareto Principle was first written about in 1895 by its founder, Italian economist Vilfredo Pareto. Pareto observed that people in his society seemed to fall into two categories: “Vital Few” and the “Trivial Many.” His initial observation referred to financial matters, but he found, on further investigation, that all economic activities generally fell into this principle.

How can this principle help in your life? Once we understand that 20% of the wealth of our activity will bring in 80% of our results, with the remaining 80% returning us with only 20%. We can now analyze what we spend our time on and focus (prioritize) on those things that bring us the highest results.

Putting this information to use will increase your efficiency. It will help you to focus on activity and not results (the results will take care of themselves if you do the work). The net result of this will be better time management. That, in turn, will give you more time to spend with family, friends or giving back to society. You will not only enjoy a better quality of life but enable others to have a better life at the same time.

All from a principle, Pareto discovered over 100 years ago. 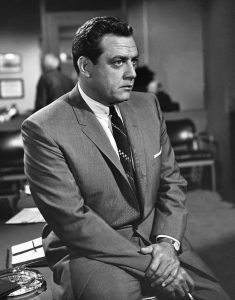 On April 24, 1952, Raymond Burr made his television acting debut in an episode of the “Gruen Guild Theatre” titled “The Tiger.” Five years later, Burr would play the lead in a classic T.V. Courtroom drama as “Perry Mason.” Written by Earle Stanley Gardener, the show ran for 271 episodes from 1957 to1966, making Burr an international star. The character was played by nine other actors in film and T.V. versions, between 1938 and the HBO series in 2020/21. It is Burr’s portrayal, however, that most people think of when visualizing Mason. The series continues in re-runs in many countries around the world.

“Laugh, and the world laughs with you, snore, and you sleep alone.”
Anthony Burgess

You Can’t Make These Things Up!

The English language has some unusual collective nouns for the various groups of animals. We are familiar with these —
– a Herd of cows. – a Flock of chickens. – a School of fish. – a Gaggle of geese.
However, less widely known are —
– a Pride of lions – a Murder of crows (and their cousin’s rooks & ravens)
– an Exaltation of doves and, presumably because they look so wise:
– a Congress of owls.

They are the loudest, most dangerous, most obnoxious, most vi­ciously aggressive and least intelligent of all primates. And what is the proper collective noun for a group of baboons?
Believe it or not — a Parliament.
A PARLIAMENT OF BABOONS!
I guess that pretty much explains the things that come out of Governments.

1. In Scientific terms, 'Pulmonary' refers to what organ?
Lungs.
2. What U.S. President resigned over 'Watergate'?
Nixon.
3. In what religion would you find the gods, Shiva and Vishnu?
Hinduism.
4. Who invented the first electric telegram in 1837?
Samuel Morse.
5. In poetry, how many lines are in a Quatrain?
Four
6. Who is credited with the invention of the kayak?
Canadian Inuit Tribes.
7. Donatello, Michelangelo, Leonardo and Raphael, are characters in what children's T.V. show?
Teenage Mutant Ninja Turtles.
8. What is the capital of Scotland?
Edinburgh.

ARIES Mar. 21-Apr. 19: You must listen to your heart, but don’t ignore your common sense. Love will find a way.

TAURUS Apr. 20-May 20: Try not to be so indecisive. A wishy-washy attitude will not impress those in authority. Be firm.

GEMINI May 21-June 20: Shake off your dismal air. Look for ways to help those less fortunate ( they are out there!). They’ll help you.

CANCER June 21-July 22: Do a favour for someone and don’t let them know about it. Kindness has its rewards.

LEO July 23-Aug 22: Pro­fessional relationships take a different turn. Be careful before converting them into personal ones.

VIRGO Aug. 23-Sept. 22: Your popularity increases as a project winds down. Expect big dividends for a job well done!

LIBRA Sept. 23-Oct. 22: Friends look to you for advice. Be careful that you don’t mislead them. Think before you speak.

SCORPIO Oct. 23-Nov. 21: Finances are looking better. Don’t blow your budget on things you don’t need. Continue to be frugal.

SAGITTARIUS Nov. 22-Dec. 21: You deserve a few hours this coming weekend for yourself. Curl up by the fire with a good book and a cup of hot cocoa.

CAPRICORN Dec. 22-Jan. 19: Face problems head-on. Don’t wimp out and use the phone or write letters. Go to the source if it won’t come to you.

AQUARIUS Jan. 20-Feb. 18: You may have given a challenging task. Do your best —that’s all that’s asked of you.

Serendipity:  Dan D’Amato, 45, partying in an Orlando, Florida motel room in December, was accidentally shot by a stranger who was having a dispute with another partygoer. Later, while being treated at a hospital, doctors discovered and removed two “huge” tumours in D’Amato’s abdomen that had so far gone unnoticed. The tumours were not cancerous, but they would soon have disabled him if they had not discovered them.

Least Competent Criminal: The unidentified, eyeglass-wearing robber of an HSBC Bank in Long Island City, N.Y., fled empty-handed and was being sought. Armed with a pistol and impatient with a slow teller, the man fired a shot into the ceiling to emphasize his seriousness. However, according to a police report, the gunshot seemed to panic him more than it did the teller and others in the bank. He immediately ran out the doors of the bank, jumped into a waiting car and sped off.

Revenge Of The Moose 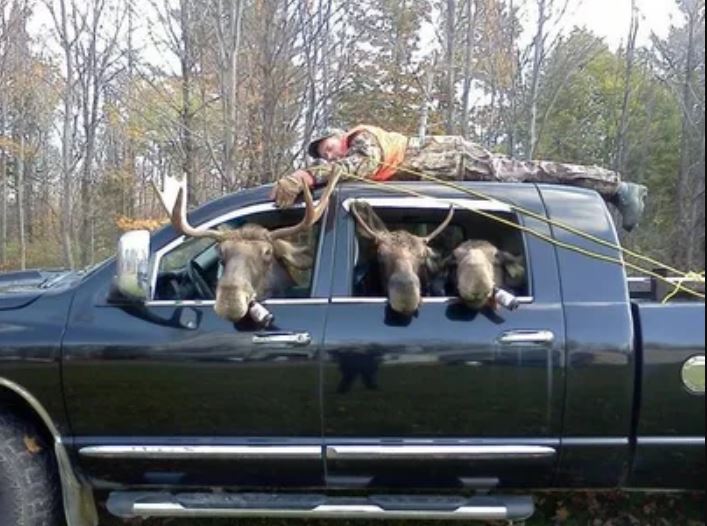 Four guys in Maine thought they would have a little fun. They strapped one guy, spread-eagle, onto the roof. Then the other three donned moose heads and began to drive down the highway. Maine police, having no sense of humour, put them in jail— or maybe it was because of the sixteen accidents (none serious) that resulted from the prank.

A man went to a flight school, insisting he wanted to learn to fly. As all the planes were currently in use, the owner agreed to instruct him by radio on how to pilot the solo helicopter.

He took the man out, showed him how to start it, gave him the basics, and sent him on his way. After he climbed to 1000 feet, he radioed in. “I’m doing great! I love it! The view is so beautiful, and I’m starting to get the hang of this.” After 2000 feet, he radioed again, saying how easy it was to fly. The instructor watched him climb to over 3000 feet and was beginning to worry. He hadn’t been in communication. A few minutes later, he watched in horror as the helicopter crashed about half a mile away. He ran over and pulled the man from the wreckage.

When asked what had happened, the man said, “I don’t know! Everything was going fine, but as I got higher, I was starting to get cold. I can barely remember anything after I turned off the big fan above me!”

You can’t escape tomorrow’s responsibilities by avoiding them today.